My thoughts on Forms in Ed Parker's American Kenpo

We learned 4, 5 and 6 period. Seven was in the making and geared to be a Knife Form.

We had to perform the Forms for our Test's as well as performing "our own" Form.

Some of these "own" forms E.P. liked and some he did not. They did not qualify or disqualify you to be graded. If you were performing Forms at a "Kenpo Form competition" you would have received low marks if you cut them short.

In Tournaments you are judged on your "Performance" not if you did the Form according the way it should have been taught.

We have a System called Ed Parker's Kenpo Karate. The names for the Techniques are still the same as when they were written, just the Five Count was changed to Five Swords. Techniques are done according to your physical and mental capability, thus called "Style" As we all know it is always open for interpretation & other opinions.

The Forms are the Forms. When it came to Techniques he would say 'Use what you like' 'Discard what you don't find Useful' but never eliminate, because it may become 'Useful ' at another time or to someone else!

The original way the Forms were taught in the 60s & 70's era has made some changes depending upon who it was taught to or from. I think Richard Planas sets the position of being the person best suitable for knowing the answers to most question when it comes to Forms.

When they reached the more advanced stages it was termed Form 4, 5, & 6

The Forms 7 & 8 were being played with as a Knife & Club set (Form)...only later to be reversed where the Club was first & the knife would follow again depending on who you ask.

Mike Pick will tell you that the concept was to originally have 10 Forms being the final number within the Kenpo system based on the notion the art had rank up to a 10th Degree Black Belt.

The concept of doing a personal Form or known as a 'Thesis ' form was to allow Ed Parker to see how a particular student could engineer their creativity & he would invite an open minded thought process just to assess his students thinking process.

I believe it was Ernie George who brought the Knife Form (7) to the forefront at the time he was under Tatum...and it was being endorsed as a 'IKC Tournament' form....not a realistic Knife Form as many may think. This brings the clear understanding a to the direction the other Forms like 8, 9 & 10 where in the research of Single Dagger to Double Dagger Forms to show a progression. As a matter of fact Mike Pick still has the photo stills in his archives of the project.

We need to remember Ed Parker was constantly methodically thinking...and he had a series of future books that would compliment his research. These books were called 'Speak with a Club' & 'Speak with a Knife'. He also was writing an Empty hand book called the use of 'Every Day Gestures'.
at 8:11 AM No comments:

Long before the tea-party movement was launched, a talk radio host in Salt Lake City got his listeners so riled up against tax hikes that they marched on Utah's Capitol by the thousands and chanted slogans that echoed through the building's rotunda while the governor remained holed up in his office, reluctant to even show his face.


The talk-show host was Mills Crenshaw, the premier voice at the time of K-TALK Radio. His anti-tax drumbeat inspired close to 7,000 protesters to show up at the Capitol to rail against a more than $300 million tax increase the Legislature passed to benefit public education.
Crenshaw, who spent 50 years on the radio, mostly in Utah, died Tuesday of complications incident to age. He was 80.
"He had a golden voice," said conservative activist Janalee Tobias. "It was just the kind of voice that made you believe whatever he said. He could really motivate people."
"He was one of the great talk show hosts on radio," said former U.S. Rep. Merrill Cook. "He was an absolute natural at that and he was a great help in many of the things I was trying to accomplish."
Crenshaw organized the massive protest in November 1987 after the Legislature, at the request of then-Gov. Norm Bangerter, passed the largest tax hike in state history.
Crenshaw had been at KTKK 630 AM for about a year, having moved to Utah from his home state of California.
He had been inspired by the California tax-limitation movement that led to successful ballot proposal Proposition 13, which imposed strict caps on property taxes.
"We were in total agreement on that," said Cook, who used the momentum from Crenshaw's Capitol Hill rally to launch a petition drive to get three tax-limitation initiatives on the ballot in 1988.
Cook ran as an independent candidate for governor that year, with the ballot initiatives serving as the basis for his political rallying cry.
"Mills was usually right there in my camp," said Cook, who has run for office more than a dozen times, including two successful bids in Utah's 2nd Congressional District.
The tax initiatives went down to defeat and so did Cook, although he received a respectable percentage of the vote for an independent.
Crenshaw and Cook continued their small-government, limited-taxes crusade, which eventually helped Cook get elected to Congress in 1996.
"I got a phone call from a little old lady and she broke down and started to cry," Crenshaw once said to explain his passion for the anti-tax campaigns.
"One of the things I've learned in the decades I've been on the air is there are times when you just shut up and listen. And I listened to her and when she got her voice again she said, 'I don't know what I'm going to do.' "
The woman, who had called in to his radio show, added: "Everyone is behind this tax increase and I don't know how I'm going to buy food and pay my taxes at the same time."
Crenshaw said he listened and then the phone lines lit up "and for two weeks, nobody wanted to talk about anything else."
"That was the peak of talk radio in Utah," said longtime Republican strategist Dave Hansen.
"And Crenshaw was at the top. He was the Rush Limbaugh of Utah."
Hansen was a part of the Bangerter administration and was at the Capitol when Crenshaw's army arrived to protest the taxes.
"I remember it well," he said.
Besides his radio career, Crenshaw launched several businesses and, for a short time, owned a radio station. He authored a book, "The Christmas of '45," and he was a black belt in karate.
"Even in his later years, he kept himself in shape," said Tobias.
------------------

Z-Ultimate students getting some training in at Wudang Mountain

"The next time I hear thunder I will know it is you with Mr. Parker working on some new kenpo techniques."
at 9:02 PM No comments:

Mr. Mills Crenshaw, one of Mr. Parker's early students back in the BYU days, passed away last night. 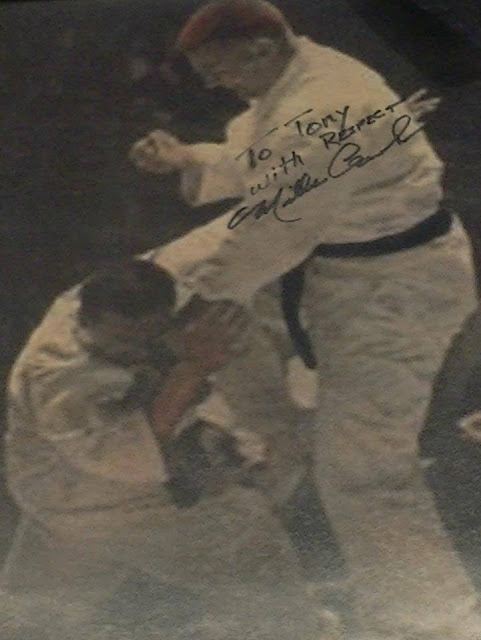 Stripping away at the system by implication, suggests that there exists a standard system from which you can perform this task. Unfortunately the “system” by which most understand it, is non-existent. One person may strip away something, only to discover it was never included in another’s understanding. One stripped, and the other didn’t, and they both theoretically arrive at the same place.

The system, as most want it to be, does not exist. It is NOT a set of codified movements of forms, sets, and techniques. Nor is it a systemized methodology to convey the aforementioned because a teacher must perform that task, influenced by his own ideas and experiences, gleaned from various points in time from the ever changing ideas of the system itself, and who taught them with the same limitations.

Because in reality it is only a series of ideas, many of which are open to extreme subjective interpretation, the “system” in Parker Lineage Kenpo-Karate, is different from teacher-to-teacher, and even student-to-student in the same school or organization. The teacher, specifically YOUR teacher IS the system, and that will change over time as the teacher matures, and gains experience and knowledge. Ed Parker’s ideas for Kenpo-Karate are a suggested open-ended training methodology, in many ways like JKD.

For those who seek definitive answers to definitive questions, that may be bad news but the reality is, the system was designed to do just as it does. It allows and encourages teachers and students alike to experiment and explore to the best of their abilities, whatever that might be. It is an open ended idea system that is devoid of hard codification. It is designed for the individual to get as much, or little out of it as they desire without the fear of structural invalidation in the process. (Street application is another review process)

(for the rest of the article follow the link)

http://msuacf.com/stripping-the-system/
at 1:04 PM No comments: 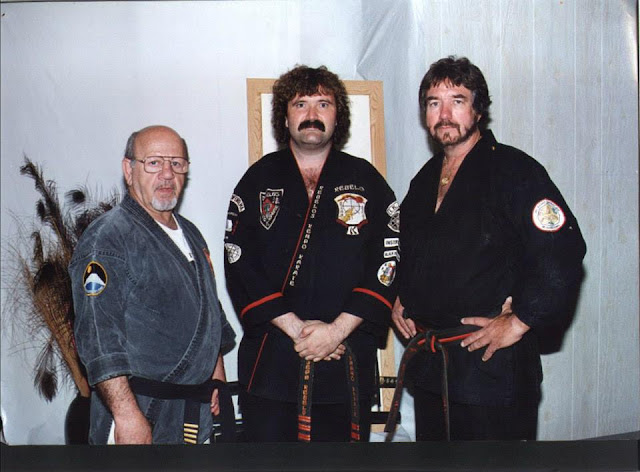 (photo from Mr. Joe Rebelo's Facebook page)
at 9:06 AM No comments:

Why is Martial Art Movement So Complicated?

When dealing with the physics of human anatomy the relationship between the many parts of the body are “infinite” when it comes to movement. In my lessons this is what Mr. Parker meant and how he explained it to me, and why he chose the titles for his last series of books.

The human body has (in general) 206 bones, (more if younger, less if much older). They are all attached, (except one) through tissue of various viscosity densities, and therefore maintain various degrees of relationship fit or “tightness” to each other predicated on the body movement and posture. It is the bodies ability to vary this “tightness of fit or structural alignment,” that allows it to perform actions that are NOT always structural sound.

In other words, humans align and misalign themselves constantly to suit the purpose at hand, and to allow fluidity that is difficult to re-create in machines. It is also why humans have the capacity to injure themselves by doing things inefficiently, whereas a machine cannot and will only work within set parameters of their mechanical design. Humans can lift heavy objects with their back muscles, when they should be using their leg muscles as the primary muscle group. We have the ability to make conscious decisions as to “how” we perform learned movement.

So the relationship between the many parts is truly infinite, and therefore possesses an infinite amount of variables that may not be accounted for with some “universal or singular movement.” It is anatomically impossible.

(for the rest of the article follow the link)

http://msuacf.com/sl-kenpo-faq-why-is-martial-art-movement-so-complicated/
at 10:17 PM No comments: 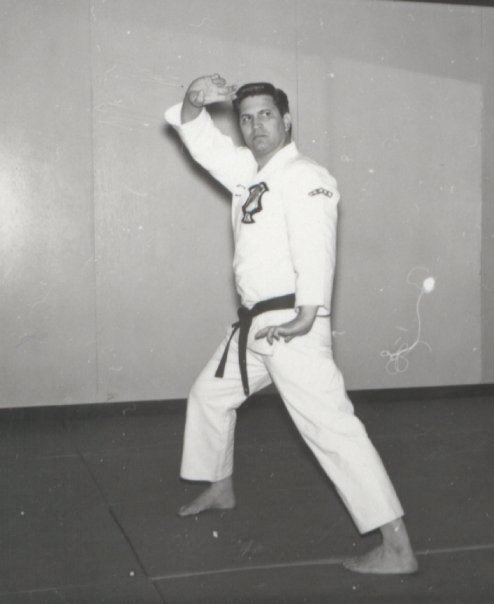 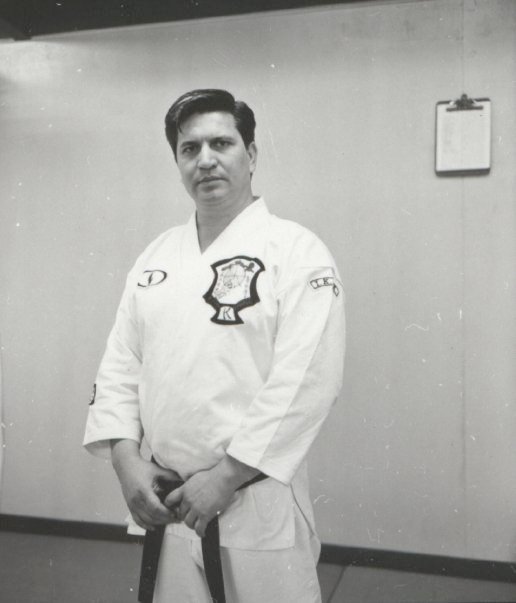 Today we celebrate Mr. Parker, who passed away 26 years ago today.
at 10:13 AM No comments: