Bend with the wind 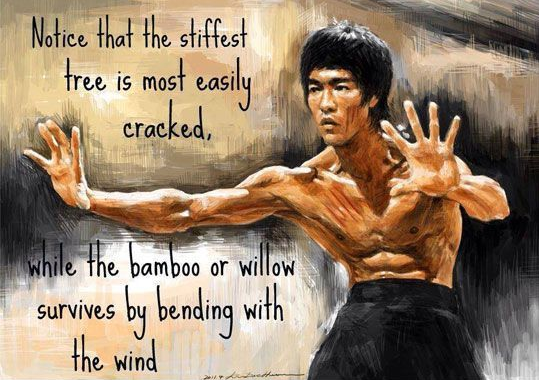 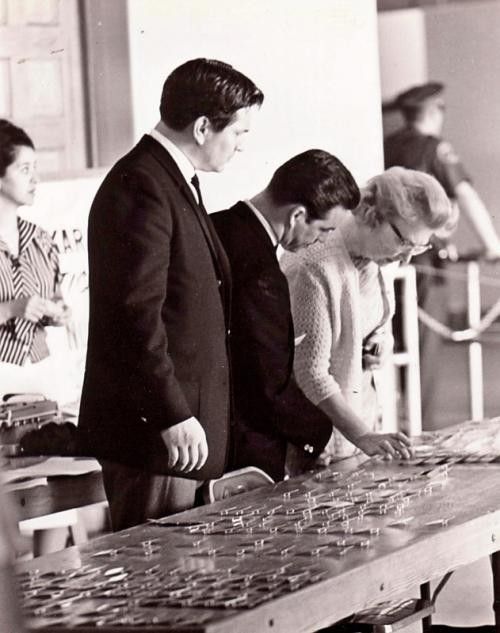 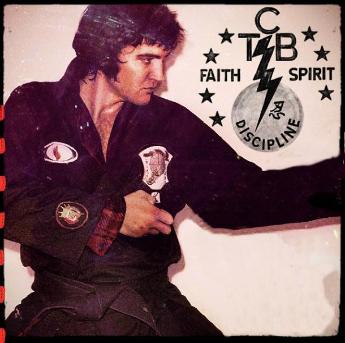 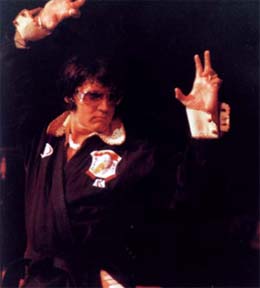 www.elvis-express.com
at 1:31 PM No comments: 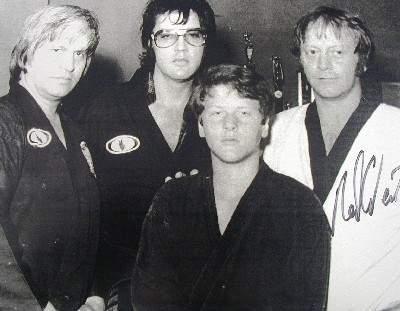 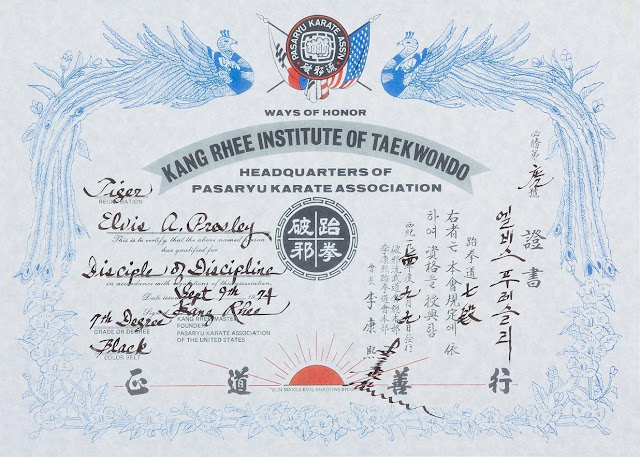 I am going to assume that the following photos I posted were also taken on the same day in Memphis based on the shirt that Elvis appears to be wearing under his gi. 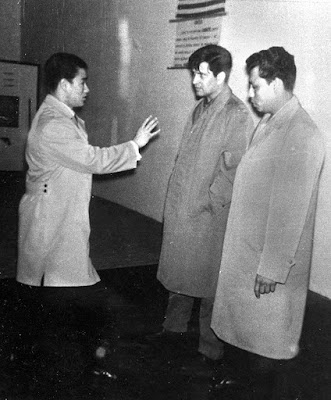 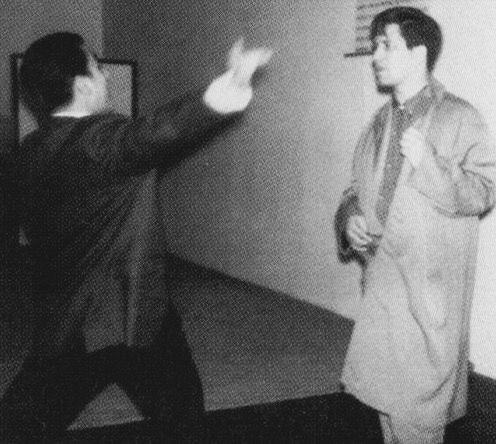 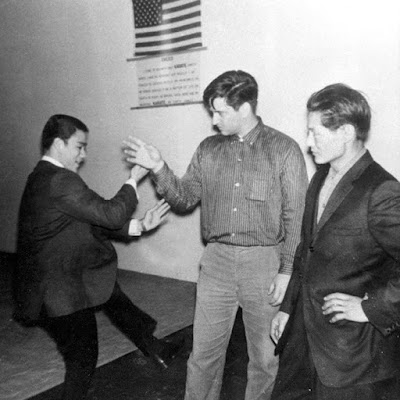 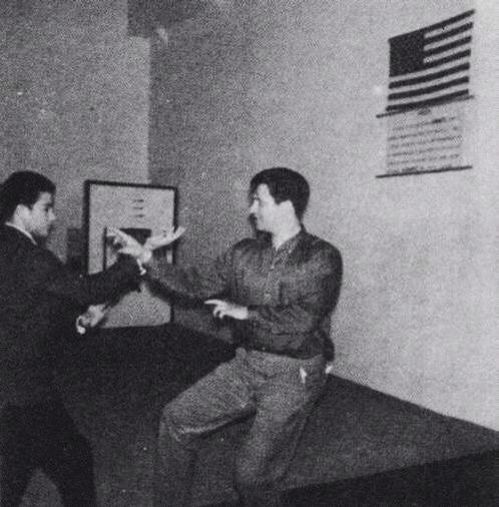 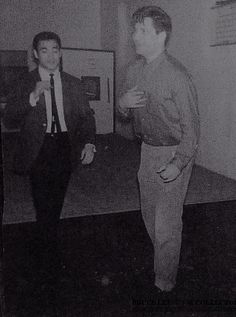 Over the years, there have been significant misconceptions regarding the efficacy of right and left side training, yet the majority of teachers who preach this perspective themselves are not equally proficient on both sides. I’ve spent a considerable amount of time looking into the concept and reached some rather interesting conclusions.

Most traditional styles and disciplines and even western boxing have techniques and moves used only from the left or right side. Most traditional martial arts styles promote a left side forward to allow use of the right (strong) hand and leg from the rear. Even when the techniques change, they still favor the right side. Even in those schools that promote “equal side proficiency,” it is never actually achieved.

The reasons are physiological involving a mental interaction with the body’s ability to perform. The condition lies in the brain. Each side of the body is controlled by opposite sides of the brain. For example, when learning a left kick, a synaptic pathway must be created or established through the right side of the brain and vice versa. No matter how you train, the left and right pathways will never be identical in path function. Even though the two sides of the brain function together, they do not have identical ways of performing the same function. They may produce reasonable identical physical movement, but how the movements are produced and controlled by the brain are very different.

Additionally, the human body is not mathematically symmetrical in the true sense of the term. It is normal in human anatomy for one leg or arm to be longer than the other, and even different in diameter. Every muscle, tendon, cartilage, and even hair growth varies from side to side. World-class athletes do not stride, jump, throw, or move the same on both sides of the body. What is even more interesting is when an athlete is trained to be exactly symmetrical in their execution; it has been shown that physical performance actually declines overall. The body may be visually aesthetically symmetrical but not precisely, physically or mathematically.

We get in trouble in our unreasonable expectations with regard to “weak side” performance. If we anticipate we can train the weak side to perform equally with the strong, we are mistaken. Because of how the brain works, you cannot attain the exact same degree of skill on both sides. It would be like attempting to teach yourself to write equally as well with both hands. You may achieve an acceptable level on the weak side but the strong will always be better and dominant.

Human beings have a natural physical preference to have a dominant side that is predetermined at birth. Even in cases where a person has “activity dedicated dominance,” they are always opposite of each other. I have a student Black Belt who writes on one side throws on the other, and still in baseball, bats opposite his dominant throwing side. However, these activities are still functionally dedicated. He can’t write, bat, or throw equally with both. This dominance is so strong in human behavior; it cannot be overcome by “training.”

Here’s a physical experiment to help illustrate this point:

Fold and interlock your arms across your chest. Take note which arm is on top, and which one is “locked” underneath the other. Got it? Now do the same thing but reverse their positions so the arms are opposite the previous position. Feeling awkward, aren’t you? I'm sure t wasn’t as easy to do as you first perceived.

In American Chúan-Fa we recognized the importance of right side left side balance, but he also knows that balance has to take a back seat to practical application effectiveness in all interpretations of a discipline whose primary focus is practical applications. In the Chinese Martial Sciences, students are taught opposite most other martial disciplines with the strong side forward for practicality.


In examining the basic idea of most techniques, they can be executed on the prescribed side or they can be executed in what is termed “Half Mirror Image.” That is a technique may be designed for one side attacking, however just because the attacker uses the other side or “mirror” of the attack doesn’t mean you have to respond in kind.

This type of training requires one side be developed significantly to be functional. The opposite side can and will be developed, but performing a different function. In another example, in the attack for “Delayed Sword” for a right punch, you defend by stepping back with the left foot and executing with the front (right) hand. “Attacking Mace” for a right punch, does just the opposite, defending by stepping back with the right foot. Both techniques are developed independently of each other on opposite sides of the body, but they both function quite well with either right or left side dominance. Although most interpretations tend to be “right-handed,” students with left-handed dominance can and do flourish.

However, in symmetrical forms, you are given the opportunity to express basic skills on both sides, which is a good thing, but no matter how well you perform, the strong side will always be better. In a fight or confrontation of significant stress, and given the choice or opportunity to decide, you will always have a preference for one side over the other.

Remember, American Chúan-Fa is, (like Ed Parker’s Kenpo Karate should be), a self-defense science first. Many, specifically in America, have confused through clever marketing, “sports training” with self-defense training. “Cross training” and symmetrical performance borrowed from sports training must take a back seat to practical function and application in reality. This will also make the astute re-examine the “commercially” created ideas of many popular arts that are more about elongating the process and “busy-work” than function.

For the same reasons of symmetrical dominance, with the addition of mechanical efficiency, “passive movements” are dysfunctional in human anatomy activity. Try running while swinging only one arm with the other in your pocket. The “B.A.M.” (Body Alignment Mechanism)” or Pak Sao in Chinese, (once called a "slapping check" translated from Wing Chun in Ed Parker’s Kenpo Karate before its removal), and all its many subcategories and functions are always active. To achieve certain skills it is imperative that both sides of the body be active and functional at all times, never passive.

In closing, true ambidexterity is a myth and although it is worthy of pursuit, it should not overshadow the quest for the practical application first. They don’t “fight” in tournaments they “compete.” On the street, right or left is irrelevant to survival. You should be capable of using both sides of your body, but not necessarily the same nor equal. All of my teachers were right-handed, and so are the systems they practiced and influenced for practicality, as it should be in any self-defense method, not art.
at 7:24 AM No comments: 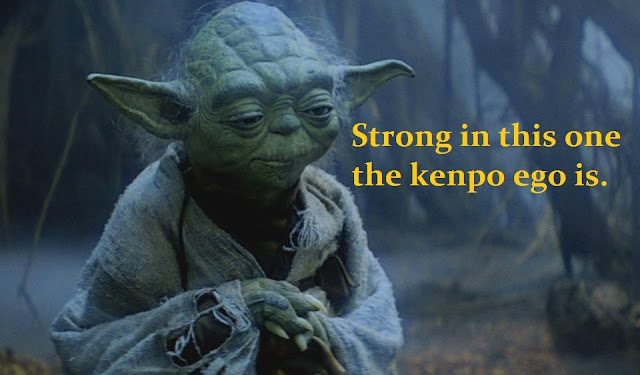