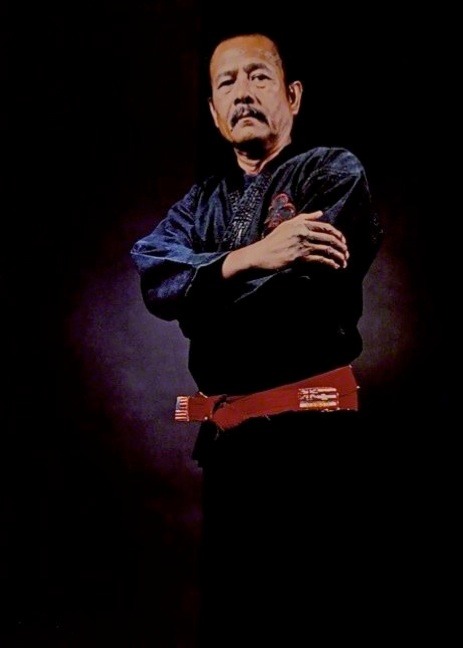 Adriano Emperado, co-founder of the martial art Kajukenbo, a martial art born out the violent Palama/Kalihi district of Honolulu.

“A workout wasn’t over until there was blood on the floor.”
at 10:42 AM No comments: 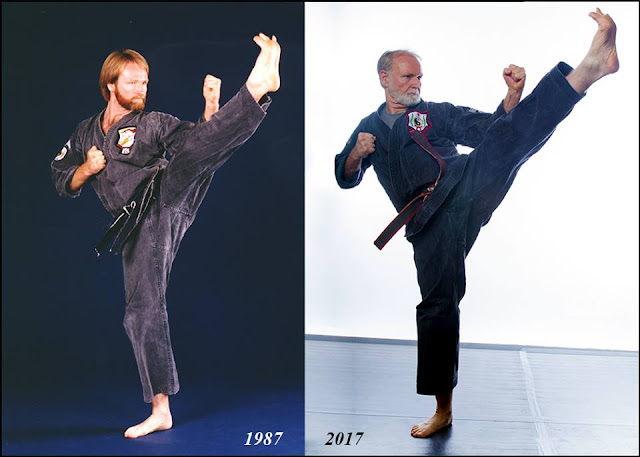 photo from Mr. Hale's Facebook page
at 6:03 PM No comments: 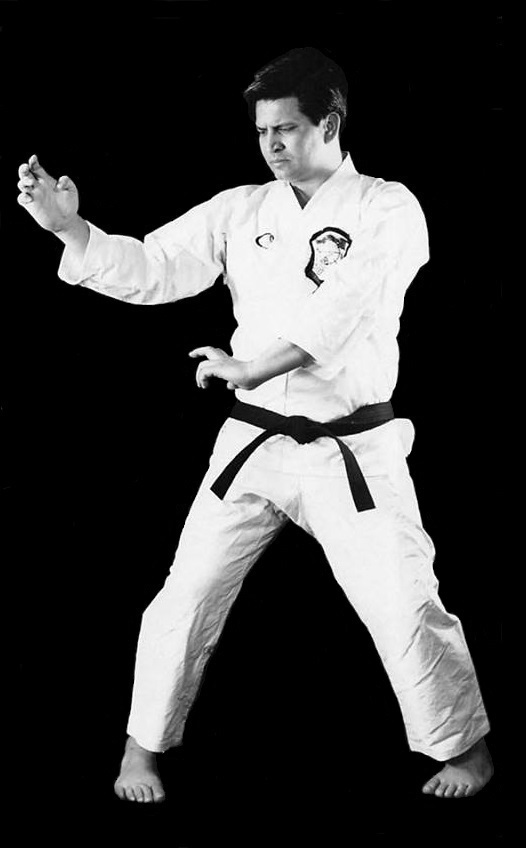 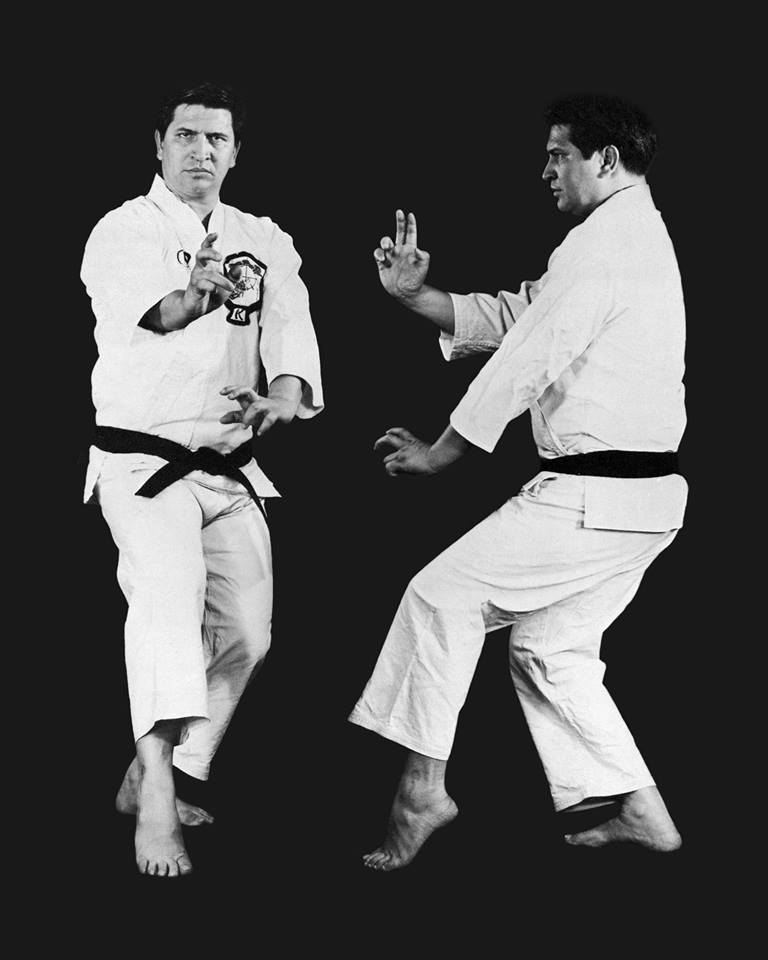 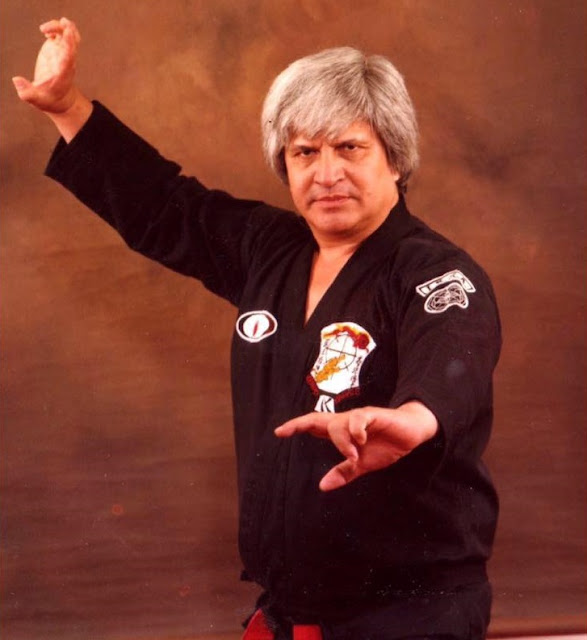 date and location unknown
at 7:27 AM No comments: 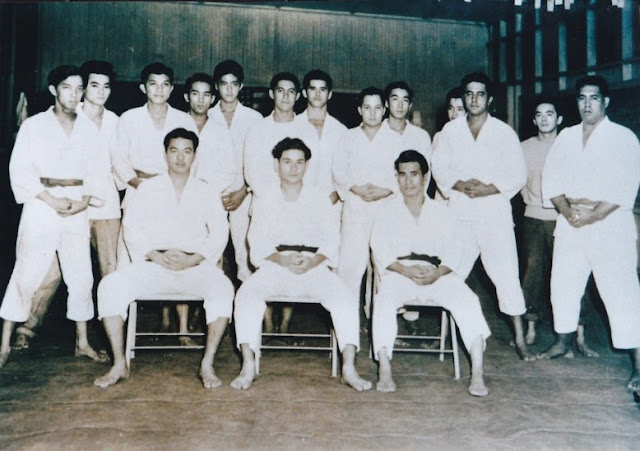 Back in the day my father Ed Parker Sr. changed from a white GI to a black Gi. Why?!


Because people of authority such as Judges and Police officers wear black.

In that time period the students wore white GI's and the instructors wore black GI’s.

It drew a distinct separation to the groups with which they belonged.

And as was previously discussed with me by my father; he wanted to change from a white Gi to a black Gi.

This was due to a delicate issue about how students and/or instructors had a habit of leaving their uniforms in the locker room at our original SoCal Pasadena Karate Studio.

Sooooome of them left their Gi’s for over a year - maybe two...could be more...

IN the locker room without washing them.

There were big yellow stains.

Did I mention that there were big yellow nasty stains?!

Soooome of these Gi’s belonged to instructors ~~

and rather than to engage in the discussion of this...

the decision was made to go to black uniforms; you know; for the hygiene!

Prior to the final decisions made; might I say that I was witness to or should I say whipped by the horrible parade of fashions and designs presented:

(*if you’re too young to know, look up the definition of ‘dickie’)

So for those of you out there who have witnessed this era maybe you can educate some of these younguns, you know, for some historical perspective!

When James Mitose returned to Hawaii in 1937 from his Kosho/Kenpo training with his Grandfather, Sukuhei Yoshida (20th Great Grand Master) in Japan, he knew that people would assume his "Art" was just another Japanese/Okinawan martial art.

He immediately wanted to send a message to all the other martial artists in Hawaii that this was not the case. He did this by wearing a "Black Gi," which was contrary to the nature of the "Traditional" Japanese martial arts! James Mitose wanted all to know that while there were some similarities to other martial arts, Kosho/Kenpo had taken a different path of development and was a style of its own - not to be considered Japanese in nature or origin!

Kenpo was not a Japanese art! Even it's "characters" are of Chinese origin - in China known as "Ch'uan Fa".

The Japanese government recognized this when they did away with the Samurai as a class and outlawed the traditional wearing of swords. At this same time the Japanese Government's edict went out: when the sanctity of human life was affirmed, Kenpo was made an illegal art. Jiu Jitsu was allowed to be practiced because it was more scientific. Meaning: Kenpo was a "killing art" that had its true origin in China!

Much of the nature of the martial arts in Japan had its origin in the Shintoism (the original religion of Japan) that was restored by the New Japanese Mejia regime in the 1890's - and the "Emperor" once again was recognized as a "God." Within Shintoism "White" was symbolic of "Purity".

A classic example of this is in the making of a "Japanese Sword" where the "Swordsmith" in his forging of the sword is dressed in "pure white."

To keep the sword "pure" when it was tested on a corpse or live prisoner, the prisoner could not be a "murderer," have tattoos (tattoos from an early date were associated with the "Yakuza"- Japanese Mafia), have a disease or be from the "Untouchable" "eta"* class. The finished Sword took on a "life" or "soul" of its own - which had to be pure! Today some of these exceptional swords are worth millions of dollars. The final polishing of the "blade" was usually done by someone other than the person who had forged and given the blade its "soul' - this person did not have to be dressed in white.

"eta class" - They buried the dead (sick and diseased) and worked with dead animals. Most Japanese were vegetarians - especially the Buddhists - and only the "lowest of the low" handled carcasses of animal or worked with leather from dead animals. In Japanese society they were truly "untouchables!" Once born into this class there was no way out! But this was true of every Japanese class. Even if you were a Samurai, but of low rank, it was almost impossible to ever move above the position into which you were born.

"Black" by its very nature took on the opposite meaning: night- death- evil. The Ninja were dressed in total black from head to foot - even covering their faces. The Ninja were always identified with darkness and evil.

The message the "Black Gi" sent was that Kenpo is a War Art; black was an indication of "Death and Bruising." To this day Traditional Japanese and Okinawan tournaments will not allow the wearing of a "Black Gi".

Ted Sumner is affiliated with a group of Martial Artists in Japan who send "exchange groups" to train and live with Ted in California. Those students refuse to step onto the mat to "freestyle" with anyone wearing a "Black Gi."

James Mitose did not allow his students to wear a Black Uniform because as beginners they had not reached the point of truly understanding and representing Kosho/Kenpo. Also "Black Uniforms" were not commercially available and had to be "custom made."

The full use of the "Black Gi" was actually instituted by Sijo Emperado and used by all Kajukenbo stylists of all ranks.

The first Black Uniforms imported to the United States were so thin and flimsy, they were torn with the first hard grab or throw.

Originally most Kenpo practitioners had to use unbleached Judo uniforms (bleaching to make them WHITE weakened the material) to hold up to the grabbing and throwing. Early Kenpo as taught in the 50's was very much Kenpo-Jiu Jitsu: realistic grabs and hard throws.

Ed Parker and American Kenpo took another path: Only instructors were allowed to wear a "Black Gi."

The wearing of a "Black Gi" also had a great "psychological" effect. I remember reading a article by Chuck Norris when he related that as a "brown belt" what concern him most were those "Kenpo fighters in black uniforms" . . . if they wore a beard, as Ralph Castellanos did, it was even worse!

For over 30 years the "Black Uniform" gave Kenpo its unique identity; Kenpo and Kajukenbo were the only styles wearing the "Black Gi'! Today so many are wearing "Black Gi's" you can't tell if they are Kenpo or Kajukenbo stylists, until you see them fight! (We are the ones disqualified for excessive contact). Just wearing a "Black Gi" does not make you a fighter.

The Black Gi is part of our Kenpo/Kempo/Kajukenbo heritage and distinguishes us from all other Martial Arts. It states to the entire world: "We are a fighting art"!

Today most Kenpo studios will allow the wearing of either a black or white Gi, or even a combination of the two: black top, white bottom; white top, black bottom.

Today the trend from the "Business Guru's" is to get us out of our "Traditional Gi." Why? So they can sell you on their "New Age Martial Arts": No uniforms; no belts; no Sensei/Sifu (replaced by the "program director"); no history; no tradition! Where "aerobics" have replaced "Self Defense" - where EVERY health spa and gym has "certified" kick-boxing instructors ($295) who have never been hit in their lives, nor have they ever landed a real kick or punch! Where Tae Bo is passed off as "True Self Defense." Almost makes you want to have the "Ninja Turtles" back as "Role Models" for the martial arts!

For most Kenpo/Kempo/Kajukenbo stylists, they will have to be "rip our Black Gi's off our backs!" before we will ever buy into their "designer sweats" and "Nike" approach to "Feel Good Karate" !
at 5:48 PM No comments:

Strength of the tiger, wisdom of the dragon 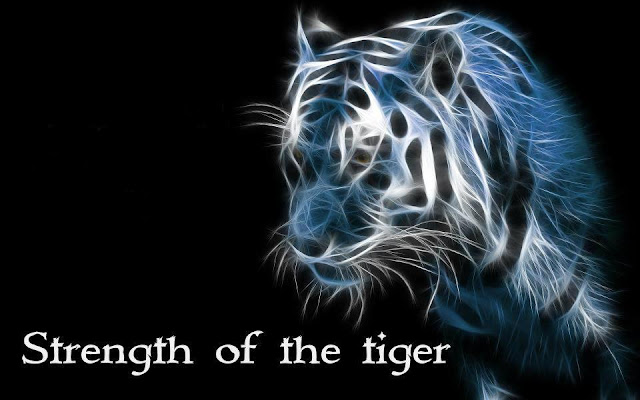 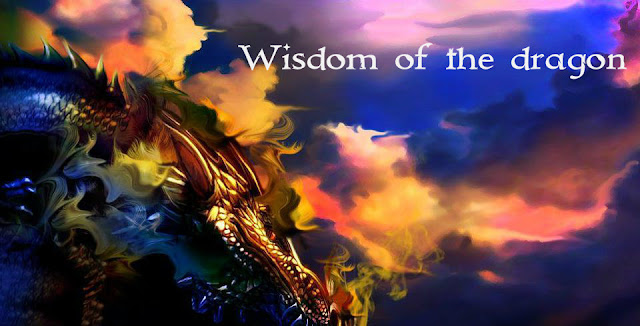 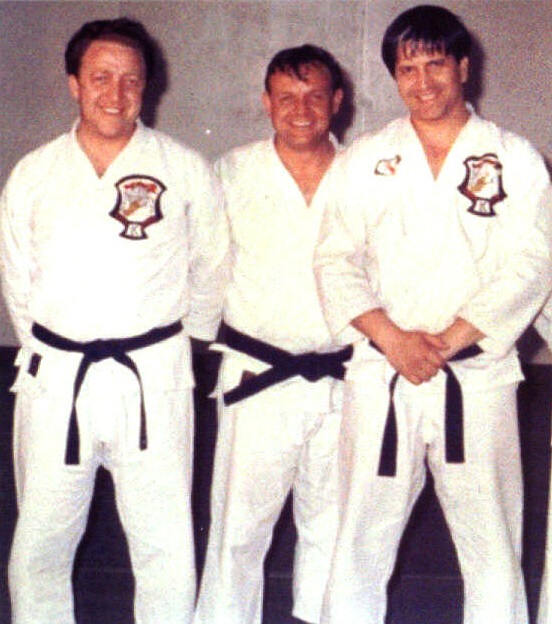 date and location unknown
at 6:10 PM No comments: