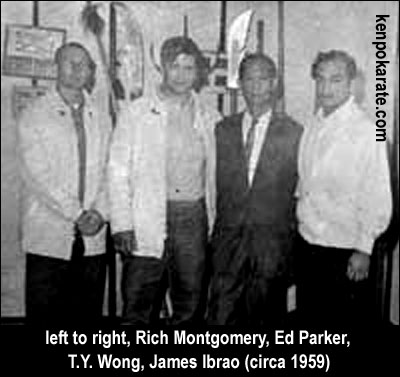 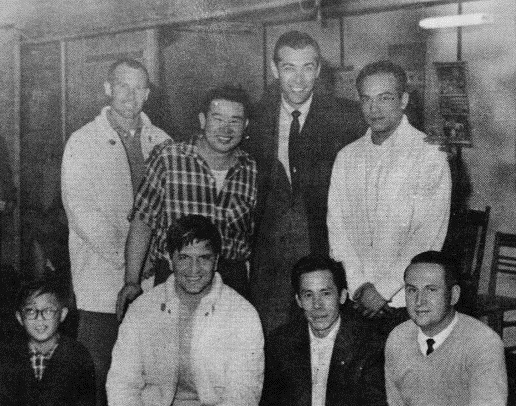 Email ThisBlogThis!Share to TwitterShare to FacebookShare to Pinterest
Labels: tributes and interviews 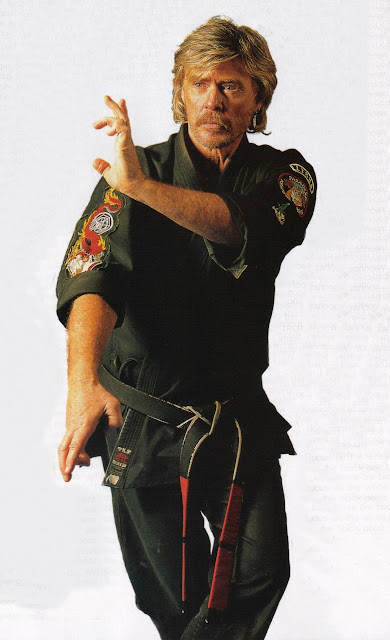 From Bruce Lee's big break to his tragic death: 8 gems gleaned from a new biography

More than his small but legendary action filmography or Kill Bill’s striking yellow tracksuit, Bruce Lee is a genre icon. Stealing scenes as one of the first Asian TV heroes as the masked crime fighter Kato in The Green Hornet and establishing a video game template with The Game of Death's level-ascending battles, Lee broke ground while straddling an ocean. He ruled both Hong Kong and Hollywood at a time when neither seemed possible — especially for one so young.

He was also a bit of a pioneer for the world of high fantasy, considering his oddball, psychedelic wizardry-and-kung-fu script for The Silent Flute was rewritten into the David Carradine movie Circle of Iron. But the actor, choreographer, author, and founder of Jeet Kune Do was never one to follow orders or labor under other people’s expectations.

That’s never been clearer since author Matthew Polly, in his thorough biography simply titled Bruce Lee: A Life — out June 5 from Simon & Schuster — delved deep into the life of one of the most impactful legends of the film world.

Polly’s exhaustive research into The Big Boss and Fist of Fury star's childhood, personal life, and, yes, his love of martial arts unveiled plenty about the man who popularized the American martial arts movie (by mixing realistic fight scenes with superspy plotting) and was a Hollywood pioneer for Asian-Americans.

Below you’ll find eight of the most interesting, incredible, hilarious, and touching things we learned about the Little Dragon:

Bruce Lee was a bit of a stoner.

Despite rumors that Lee was a teetotaler, Lee occasionally drank and was especially fond of sake. The sparseness was partially for health reasons (aside from wanting his body in peak physical form, Lee also likely suffered from alcohol flush reaction, an enzyme deficiency common among East Asians) and partially because he liked cannabis better. Steve McQueen introduced Lee to marijuana, and the drug quickly became his favorite. He once arrived at a friend’s house and passed out cigar-sized blunts. When told that only one is typically used and passed from person to person, Lee replied, “No need to share. I want everyone to have their own.” In fact, according to his Enter the Dragon costar Bob Wall, it took two hash brownies to calm the active Lee down into “a normal human.”

Lee was the first kung fu instructor to accept students regardless of race.

Dealing with various forms of racism his entire life (the first newspaper article ever covering Lee was entitled “Lee Hopes For Rotsa Ruck”), the Eurasian actor was often quoted as saying he wanted “to think of [himself] as a human being” rather than any specific mix of ethnicities. This philosophy carried over into his professional life. Upon opening his martial arts school in the late ‘50s in Seattle, Lee took on students he deemed worthy — whether or not they were deemed “outsiders.” One of these students was Jesse Glover, a black judoka who was one of Lee’s first disciples. Glover couldn’t find any martial arts teachers willing to take a black student until finding Lee. The two remained friends until Lee’s death, with Glover filling in Lee’s grave after the funeral.

While there were many, many versions of Lee’s controversial death (in the bed of his mistress, Betty Ting Pei, no less), the typical assumption that an allergic reaction to a painkiller was the cause of his “death by misadventure” ignores the recent strides medicine has made in diagnosing heat stroke. A month before his death, Lee collapsed under similar circumstances, feeling dizzy and having seizures under hot and sweaty conditions. These symptoms, along with highly elevated body temperature (which past diagnosis had erroneously categorized as feverishness) and the fact that Lee had sweat glands surgically removed from his armpits weeks before his first collapse, point to one of the leading causes of death for young athletic men. That Lee was known to overwork, lose weight, and lose sleep when making films only bolsters the case that his death on July 20, 1973 (the hottest day during that Hong Kong summer), was likely caused by heat stroke.

Lee’s acting career was put on hold because he wouldn’t stop street fighting.

Before Bruce Lee was an action star, he was coming into his own as a child actor in Hong Kong. But after his breakout film My Son A-Chang, his schoolwork and personal life were in jeopardy. The troublemaking teen was constantly fighting rivals on the streets and rooftops of town, pranking those who didn’t agree with him (he once planted a firecracker-filled bucket of excrement in a victim’s bathroom stall) and failing his academics. He also pulled a knife on a particularly tough gym teacher. He was a troubled youth on and off the screen. To reach his son, Lee’s father, Hoi Chuen (one of Hong Kong’s most successful stage actors), banned him from making a sequel to My Son A-Chang. After a yearlong hiatus, Lee was allowed to make The Beginning of Man, but since his behavior didn’t improve, he earned himself a two-year grounding from the movie business.

Batman and a hairdresser were responsible for Lee’s early Hollywood career.

Jay Sebring, Hollywood hairdresser and karate enthusiast, had seen Lee perform a controversial demonstration and speech at the 1964 Long Beach International Karate Championship. He also cut the hair of William Dozier, a TV producer looking to cast Charlie Chan’s son for a prospective James Bond-esque show titled Number One Son. Dozier loved Lee for the role and was producing the longshot Batman show at the time. The success of the campy superhero adaptation would determine whether the studio accepted his next project... and Lee. Batman was a hit and, though Number One Son was nixed, the success of Adam West’s detective meant that superheroes were hot — and The Green Hornet wasn’t far behind. That meant Lee could be Kato, who crossed over onto Batman for a few episodes. Lee and Burt Ward (Robin) even lived in the same apartment complex.

As a teen, Lee was named the 1958 cha-cha champion of Hong Kong, after the Cuban dance craze came to that country by way of the Philippines. He invented his own moves, combining kung fu and traditional cha-cha steps, which gave him an advantage over his opponents in the nightclub holding the all-Hong Kong contest. His selection of his little brother, Robert, as his dance partner probably didn’t hurt either. With the title under his belt, when the youth moved to San Francisco, he was able to leverage it into a class teaching members of the Bay Area’s Chinese community the latest dance moves for a buck a pop.

Lee was a fight choreographer for some of Hollywood’s biggest names in the ‘70s and a regular in their party scene. He hobnobbed with Steve McQueen, Roman Polanski, Sharon Tate, and James Coburn. So when Charles Manson’s followers horrifically killed Tate, Sebring, and three others at a house Polanski was renting, the tragedy struck especially close to home for Lee. Tate and Polanski were clients, while Sebring was one of Lee’s closest friends in town. But when Lee mentioned to Polanski that he lost his glasses — the director knew that an unidentified pair of horn-rims were found at the house — Polanski grew suspicious and took the actor to buy a new pair. But when Lee’s prescription didn’t match that of the evidence at the scene, Polanski thankfully relented.

Innovation was close to Lee’s heart in all things: even profanity.
Bruce Lee had a notoriously short temper and a documented love of cursing. Whether he was chewing out directors in Hong Kong or joking with his friends, Lee was a poet of profanity. One of the best instances of this is in a letter to then-Warner Bros. president Ted Ashley, in which Lee explained how, with Ashley’s help, he would be able to branch the divide between Hong Kong action films and the first hit Hollywood kung fu film. “My obsession is to make, pardon the expression, the f******est action motion picture ever made,” Lee wrote, cementing his place as a personality as profane as he is legendary.

http://www.syfy.com/syfywire/bruce-lee-gems-gleaned-from-new-biography
at 8:24 AM No comments: 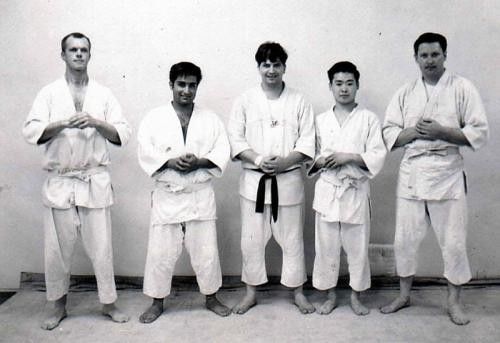 If I'm not mistaken this photo is of Mr. Parker at BYU with members of the BYU Judo club.
at 3:12 PM No comments: